This is a story I wrote some time ago, which I thought was worth rekindling-with one of my very early sketching efforts. 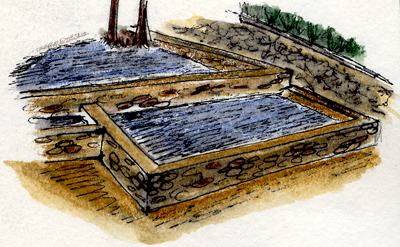 San Casciano dei Bagni is a beautiful little hillside town to the West of Chiusi, in Tuscany. It has intricate little streets, a fantastic view over to Monte Amiata, but best of all, there are hot springs. and outdoor Etruscan baths. This particular day there were no other people at all, so we were able to bask in the hot water in a state of total relaxation, except for the fact that there were a lot of insects. As we climbed out of the baths in a state so laidback as to be almost unconscious, two commune workers arrived to empty the waste bins at the springs. As usual wanting to use my Italian, I remarked to the two men, dressed in the usual fluorescent orange overalls, ‘No people but plenty of insects’, not for one moment expecting the response I got.

‘Ah but remember,’ began the younger of the two, a large man of about 50, ‘that man is not the head of nature: and if we no longer had the insects then there would be an imbalance of the natural. And,’ he added, ‘remember also that man only arrived on the earth during the last fifteen seconds of the day.’ ‘You are familiar, of course, with the concept of the creation of the world being condensed into a single day?’ enquired his colleague, a small man in his sixties with skin like leather.  ‘Er yes’, I replied truthfully, but somewhat unsure of where I stood in the pecking order with these intellectuals. I mean I was only making conversation, and didn’t really expect my casual comment to invoke a major debate on Man’s place in the overall scheme of things.

The younger man looked me up and down and asked ‘why is it that you speak Italian so well?’ Recovering a little, I explained how I’d lived in Italy for three years  but my confidence did a swift u-turn, when he very seriously asked: ‘are you familiar with the works of Origo?’ I confessed that though I knew the name, I had not read anything by her. He then went onto explain how to get to La Foce, which was the house were Origo lived, (though he informed us, that it was open only on Wednesdays….) As he was explaining the route to me, his companion suddenly leaned on his broom and with a slightly faraway look in his eyes said: ‘I first read it when I was a young man, but when I eventually went to the place, the reality and fantasy came together in an…’ He searched for the words. ‘An orgasm of delights!’ his younger colleague offered . . .

POSTSCRIPT– Some years later I was recounting this tale to someone at the baths, when the younger of the two men turned up! He said (in Italian) ‘Good morning‘ and whilst continuing his work added “and there are three great things about this place: we’re in Tuscany, there are these Etruscan baths fed by natural hot springs, . . .and it’s free!’

We laughed, he bid us good day and left.

This is still my favourite Debord quote: 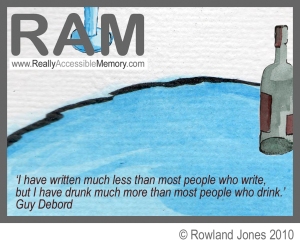 ‘I tell you we are here on Earth to fart around, and don’t let anybody tell you differently!’