For, I think, 13 years Eric–aka Billy Shaker has organised a Bob Dylan Birthday Party gig. I’ve taken part in the last three years. This was the gig at Ricomincio da Tre, San Mariano, Perugia. Loads of musicians – – a little bit of chaos but all in all a good time! Happy Birthday, Bob!!  Here’s a few pics-There’s lots more pics here –  Lesley’s camera was inadvertantly set to ‘burst’ mode so as a result, certain parts of the evening were over featured- namely those featuring me- well, she is my wife, after all!!

Last night I went to see a band play at Ricomincio da Tre in San Mariano, Corciano:  the Alberto Mommi Quartet. The saxophone is not my favourite instrument mainly because often players – especially, young ones – play overlong solos, with a tone that is harsh. It had forgotten how beautiful Alberto’s alto sounded:  soft and round and gentle. Complimenti!! Great band, too with a very interesting young drummer!!!

Unusually I slept quite well, but as usual I had a vivid dream: last night it involved going out somewhere in Manchester and I had unwisely gone out in my stockinged feet. Calling into a hardware store(!) I discovered  that they sold Converse style baseball boots, which were displayed in a dis-assembled state for some reason. These particular ones were orange and printed on the rubber sides were the words: “The Phil Woods Alliance”   Yes, Phil Woods –  the great alto player – – who frankly, I had not thought of some years, sprang up in my dream. I think Alberto would take it as a compliment!!! 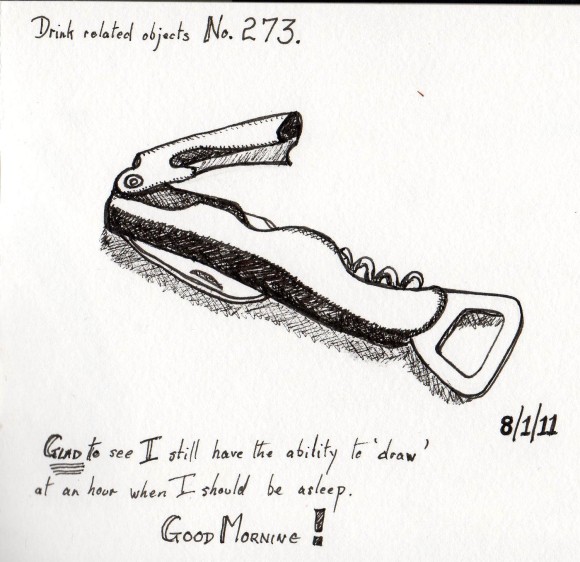 It was one of those nights….. we went to Ricomincio da Tre, the first time for a long time.. a great pizzeria run by Fabio Giachetta . . great guy and guitar obsessed! Also bumped into Fausto (another guitarist) and Teresa. Sat eating drinking and chatting and got home quite late, after a great evening . . .and then couldn’t go to bed so ended up ready and scribbling . . .and inevitably the drawn object ( . . and the object to which I am drawn) is inevitably drink related . . .

It was on 24th July 2007 that Lesley and I started our plan to meet people in blues: the first stop being Trasimeno Blues: a major festival and near where we live. The first people we met were Papaleg Acoustic Blues Duo, Pierluigi and Marco: two lovely guys from Abruzzo. I also met Brit Andy Martin, a slide/steel guitar player, who lives in Perugia.  Then Crystal White appeared and asked me if I was Smokin’ Joe Kubek- that night’s headline act! Also met up with Gianluca di Maggio, the brains behind Trasimeno Blues which now includes an Autumn Season called Bianco Rosso e Blues and Soul Christmas.

It was few weeks later when we heard Cjmbaljna Blues Band playing in Panicale: I knew the drummer, and they invited me up to play a few numbers which was great fun. A few months later we met at another of their gigs, a friendly pizzeria called ricomincio da tre, run by Fabio, a great bloke and a crazy for guitars: we got on immediately….. It was at this point that CBB and I set up a ‘project’. We did our stage debut in February after several months of intense rehearsal, and then recorded a demo. This started the ball rolling.

After a number of local gigs to keep us match fit, we were invited to Sicilia Blues to play for ‘Blues Band on Stage 2009’ We were on after a band called Cotton Field Hollers; who had done well previously. Unfortunately for them (but not for us) this left them a little overconfident: they were very good but …. after all, who was this bunch of youngsters with some ‘ole guy’ fronting them?  We took the place apart, and in fairness they were extremely (and genuinely) complimentary after the gig. 24th May we were back South for the final in Sicily. This was fantastic fun, and we met some lovely people who have become close friends: in particular, Enzo and Teresa from the Walking Trees , and Sandro Pittari drummer with, amongst others, Marco Gioe’s Shotgun. In the end, the judges decided to invite all the bands to Etna, rather than selecting three as was the original plan!

June began with a solo gig here in the village, then 26th June we were at the other end of Italy. We were in the final of I.B.C. to select a band to represent Italy in Memphis 2009. We eventually came 5th. Had a great time and met more lovely musicians: including Tillamook, who deservedly won. Jimbo Mathus from New Orleans and hs band were fun: the only downpoint was the mosquitos who devoured Lesley!

A few days later it was The Blue Sunset where we again met the Papaleg boys, Andy Martin, Kellie Rucker and Olga, Jimbo’s wife who were all launching new CD’s: Also met Livia Palone who’s become a good friend.

8th July we arrived in Sicily  for Etna Blues. We were also invited to play with Max Stratos and the Border Radio in a little town called Lentini,  which was a good night out: more great guys! For Etna Blues, I reckon we had the best support slot as we were opening the first night : it went down really well and then we jammed with Nine Below Zero, and the guys from the King’s Brothers. The next few weeks were frantic with three gigs during Umbia Jazz, and then (on my birthday) the debut at Trasimeno Blues: which went well although the sound system let us down a bit. A week later I went to see Bluesindrome at Taverenelle and ended up playing with them and Crystal (White) which was excellent.

August saw my last gig with the project. So we ended where we’d started in Panicale. Again a great night, and fortuitously I met Carmelo Russo a guitar player from Genova. We rehearsed a few weeks later and though our musical backgrounds are somewhat (!) diverse: – – Gypsy Kings& Flamenco vs Blues&jazz – – it works! So another project Jamencuz was born.

At the beginning of September, I was involved with a project called ContaminazioniUrbane,  during which I fronted a jam session at Urban, and did a set at Al San Giovenale in Orvieto for the closing night, when Carmelo joined me for a few numbers. We then went off to Tropea for the blues Festival during which I jammed with Red Onions Band and met old friends: Enzo, Teresa, Kellie and made new ones Maurizo Pugno, and Sophie Kertesz and generally had a wonderful time!

November and December have been relatively quiet on the gig front, but I did play wth Livia Palone at Lettere Caffe in Rome and did our first full gig with Jamencuz! which went down very well. The rest of the time (musically) has been spent in recording: since moving here March 2007 I have written 30 complete songs! Also I’ve been researching where to go next.

So that’s the story so far,

Next week I’ll post some of the plans we have and what we have done so far.