For Lesley, the apple and therefore the penny never dropped. This came to light during the preparations for incarceration . . or travelling with Ryanair as it is euphemistically referred to.  Their draconian fee structure means that at the whim of one of their hench persons, you can be charged for being overweight….. ‘luggage wise’ that is…. though I suspect that O’Leary’s boffins are already working on a means of ‘svelte’ monitoring!

Anyway, presumably with the aid of several sturdy friends, ‘our’ bag has been stuffed to within 17 mg. of the allowance. At this point I tentatively asked: ‘Is there more to go in?’ She uttered the immortal words ‘Just my face cream…..’

I put it to you, Ladies and Gentlemen of the jury: what is the consensual concept of ‘face cream’? One could imagine a small pastel-coloured jar containing  an even smaller amount of delicate balm marketed at a price that could keep a family of five happy for several weeks. OR a large but durable plastic bottle containing a large quantity of economical everyday facial gunk. No. I was totally unaware that in this case context ‘face cream’ is a collective noun for a number of items including a range of lotions to cleanse and soften together with an appropriate means of application.

Ah well, no problem to survive with only one pair of shoes and a spare pair of jeans to last me the week. BUT I have to conclude that changing the description of items is as likely to reduce their weight as me changing my name to Mr. Third World Country, would write off my debts……. 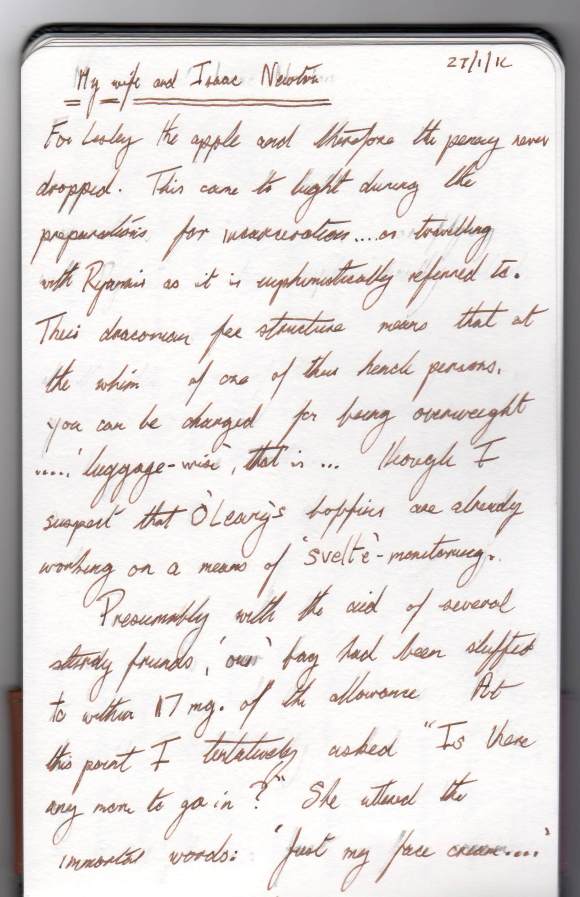 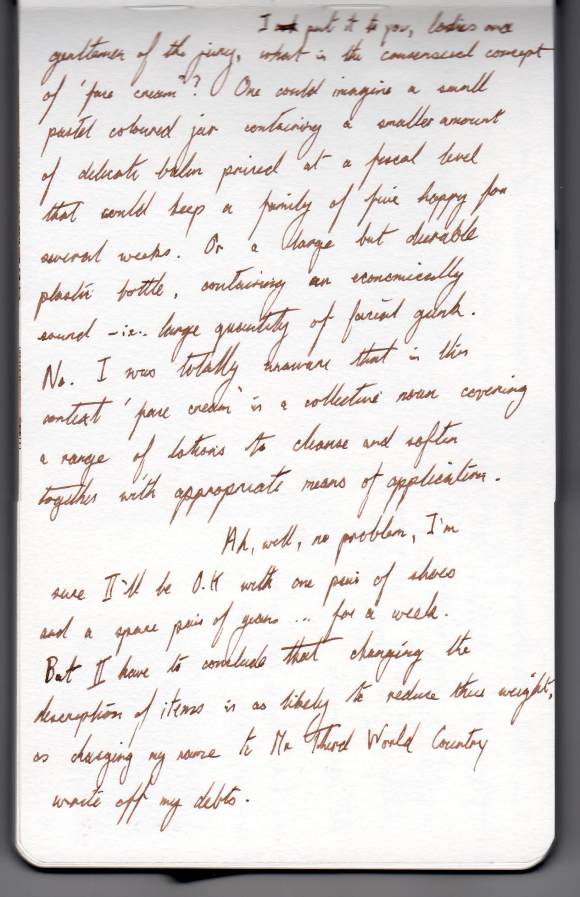 I think we only use the adjective ‘bated’ in one context- ‘bated breath’.

I’m wondering, whether there any other adjectives that have such a ‘unique’ role. Any ideas?

I planned to include simply to include the scanned pages: but I am not sure whether my writing is legible…. so, the full text is typed below

Well, it was never going to be easy was it? on the same day in the same column: right next to JONES there was FRANKENSTEIN. It didn’t bode well. Then to be called Rowland with a w! All my life it’s been mis-spelled. I thought e-mail would eradicate the problem: mis-spell the name and the message doesn’t arrive right? No.

It’s not that unusual a name, but unusual enough. I once arrived on a building site to start a summer job. The foreman did the introductions: ‘I’m Bill, this is Eric, Stan, Bob and Chris.’ I replied, ‘I’m Rowland’. After the third incredulous ‘Pardon?!” I reverted to my first name , TOM, and as a result was welcomed on site every morning for two months by a spirited rendering of ‘The green green grass of home.’!!

Being known by my middle name resulted in other confusions, too. I once applied for a new credit card, specifying ‘T.Rowland Jones’ as my card holder name. After several incorrect cards were delivered –  ‘Rowland T Jones” T.Rowland-Jones”  – I explained through gritted teeth that I would like the card to read:‘T full-stop blank space Rowland Jones.’ I am sure you can imagine my delight when a card arrived that read: ‘T.(BS) Rowland Jones.”!!!